Several years ago I offered a “brief definition” of Targum and the Targumim but here is the more detailed entry I wrote for the Dictionary for Theological Interpretation of the Bible.

The Hebrew term “targum” (plural “targumim”) literally means “translation,” but in the rabbinic period (c. 1st century – 7th century AD) the term came to refer specifically to the written Jewish Aramaic translations of the Hebrew Bible (Old Testament). Targumim exist for every book of the Bible except Ezra, Nehemiah, and Daniel, possibly because these books already contain significant portions in Aramaic. Like the Septuagint, there are actually several different textual traditions within the corpus of targumim. Thus there are three primary groups of targumim that are translations of the Pentateuch: Targum Onqelos, Targum Pseudo-Jonathan, and Targum Neofiti. There are also fragmentary targumim to the Pentateuch of which there are at least five different groups in addition to the Cairo Geniza fragments. Targum Jonathan is the targum to the Prophets (within the Jewish canon these books include Joshua, Judges, 1-2 Samuel, 1-2 Kings, and the major and minor prophets, but not including Daniel). Finally, targumim exist for the Jewish canonical division of the Writings. These are often later translations (probably from the 6th-8th centuries AD) and different textual traditions are sometimes attested for individual books, e.g., there are two quite different targumim to Esther.

The origins of the targumim can probably be traced back to the liturgical practices in the synagogue. The Mishnah (c. 200 AD) states that the reading of the biblical text in a synagogue was to be accompanied with an appropriate translation so that all might understand the text being read (m Meg. 4.4). Rabbinic texts make it clear that the meturgeman, the one who translated the biblical text into Aramaic during the synagogal service, was not allowed to read from a written text, so that the congregation would not confuse the translation with the actual holy, written word. This leads to the possibility that the physical texts that we study today may not, in fact, represent the actual targum as recited in the synagogue. Nonetheless, the written targumim that we can study share this same respect for the Bible as God’s word and exhibit this in the nature of the genre.

The targumim are at once both translation and commentary. As translation a targum is engaged in the task of faithfully representing God’s word by rendering into Aramaic every word of the biblical text in its proper order. (This is contrast with midrash, which is rabbinic exegetical commentary, that often comments only upon select verses.) Yet in the targumim commentary is also frequently woven into the translation and thus moves targum beyond what we might define in modern terms as a “simple translation.” This is most often found as simple glosses or additional words and phrases added to the text for explanation, but occasionally larger sections of material will be spliced into the text.

For example, Gen. 15.1 reads, “After this, the word of the Lord came to Abram in a vision.” In one targum tradition, Targum Onqelos, the text reads, “After these matters, the word of the Lord was before Abram in a prophecy.” (The italics indicate material added to the base translation of the Hebrew text.) Here the targumist has avoided referring to God’s revelation to Abram as a vision, possibly to avoid an anthropomorphic attribution to God, while emphasizing that the message that Abram received was indeed from God and was prophetic. Yet another targum tradition of the same passage, Targum Pseudo-Jonathan, is much more expansive. I will offer only a small portion of it here. “After these words, when the kings had gathered together, and had fallen before Abram; and four kings had been slain, and nine hosts brought back, Abram reasoned in his heart, and said, Woe to me, because I have received the reward of my appointments in this world, and have no portion in the world to come…” In this targumic version several lines precede the actual translation of Gen. 15.1 and place the biblical passage of God reassuring Abram that his own child shall be his heir in what the targumist understands as the proper context. Even this brief example illustrates that the exegetical activity of the targum is similar to that of midrash, but its mode is significantly different as it is confined within the context of translation.

2 thoughts on “What is Targum?”

Not the best Adam-Eve-Apple-Computer comic I have ever seen, but I do like the groggy, bandaged Adam. Somehow I never quite saw […]

A tip of the ol’ cranial cover to my former student ES. An article from Daniel Drezner of Tufts University. The four […] 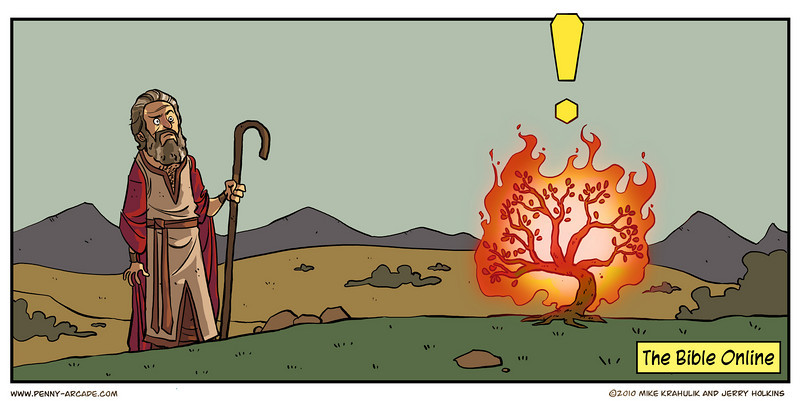