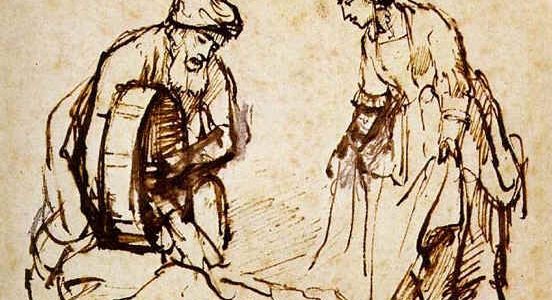 A long title. I shall have to find a shorter version, but it gets at the challenge we often find in Targumic studies. For those who are not familiar with the Targumim a very simplistic description is this: Aramaic translation of the biblical text PLUS interpretive material. A little more precisely, I would say that most Targumim present a word-for-word representation of the biblical text into Aramaic and occasionally add exegetical material, but in a way that allows the result to be read as a flowing single text. In other words, if you did not know the biblical text, you would not necessarily know that anything had been added. For a far more detailed description of Targum see

While in Freiburg I am working on my book on Targum Ruth. This weekend I have been tackling the opening verses and I thought I would share a couple of pages related to the “Ten Famines” found in Tg. Ruth 1:1 and in the midrashic texts Gen. Rab., Ruth Rab., and Midrash Shmuel.1 The question here is, how do we determine which source is earliest. There is little to help us linguistically so we need to consider other, literary factors.

We now join the book already in progress…

Once again we find that V is missing a word that most mss contain, תקיף. In this case, the word is an addition to that which is found in mt and not necessary to reproduce the biblical text. Most mss of the Targumim add תקיף, “severe,” to qualify the famine. Once again, Beattie believes that this is more likely a sign of V’s originality than a corruption or error, although he grants that it is a ms with errors.1 Yet V and all but two mss2 contain the list of ten famines that follows. Perhaps תקיף is an addition, but the qualifier provides the hook on which to hang the midrash of the ten famines. The section opens, עישׂרתי כפנין תקיפין איתגזרו מן שׁמיא, “ten severe famines were decreed from Heaven….”3

Famine was a common reality of the biblical world. They were often mentioned and used to progress the narrative in the biblical text. In Tg. Ruth the reference to “a famine” provides the Targumist an opportunity to remind the audience of God’s history with his people.

Since the motif of famine is so common in the Bible it is not surprising to find a number of other rabbinic texts that have near-identical lists. They can be found in Gen. Rab. 25:3, 40:3, 64:2; Ruth Rab. 1:4; and Midr. Sam (Buber) 28:3. Gen. Rab. and Ruth Rab. are both considered fairly early midrashic collections, with Gen. Rab. usually dated to the 5th century ce and Ruth Rab. to the 5th or 6th century ce.4 Midrash Samuel is a late text, probably from the 11th century ce.5

The versions of the list found in Gen. Rab. and Ruth Rab. are presented in typical midrashic fashion. That is to say, an assertion is made and then a scriptural citation is offered to support it. For example, in all instances of the list in the midrashic texts we find the first famine listed as “once in the days of Adam: ‘Cursed is the ground for thy sake.’” For each famine listed, a proof text is always provided. While Ruth Rab. contains this same material, again in nearly identical wording and format, it prefaces the section of citations with a simpler list, very similar to that which is found in Tg. Ruth.

This introduction is then followed by the usual, midrashic listing of identified famines with proof texts.

The version found in the Targum is both simpler and more stylistic than those found in Gen. Rab. and Ruth Rab. While the introduction to the list of famines found in Ruth Rab. is most similar to Tg. Ruth, even in this case the language of Ruth Rab. is curt and abrupt compared with the flowing prose of the Targum. Tg. Ruth reads, “Ten severe famines were decreed from Heaven to be in the world from the day of the creation of the world until the time when the King Messiah shall come, to reprove through them the inhabitants of the world.” While this is clearly a single exegetical tradition, it is impossible to say with absolute certainty which text preserves the older form, that found within the midrashim or Targ. Ruth. There are literary reasons, however, for considering the targumic form as later.

The Targumist has crafted and adapted the traditional list so that it fits seamlessly and smoothly into the text. It seems likely that such a reworking is presupposed upon an existing tradition. The fact that the Targum does not present any proof texts further supports this suggestion. The Targum merely states that there were famines in “the days of Lamech” and in “the days of Abraham,” for example, with the assumption that the audience will know the texts obliquely referenced. Of course the genre of Targum prefers such a style. Actual citation of proof texts is the style of midrash, not Targum. Still, it seems unlikely that this addition in the Targum would function well if the audience were unaware of the pre-existing tradition.

3 For more on the other eschatological lists in the Tg. Meg. see {Brady 2009}

2 thoughts on “The midrash of the Ten Famines: The challenge of determining historical primacy of exegetical traditions”