Last week I blogged with some thoughts about faith in preparation for the sermon I was to preach today. Except I was wrong. I was celebrating (leading the service to non-Anglicans and Catholics) but not preaching. Which was fine because the sermon preached was excellent. But so that there is no waste I will share what I had prepared here. 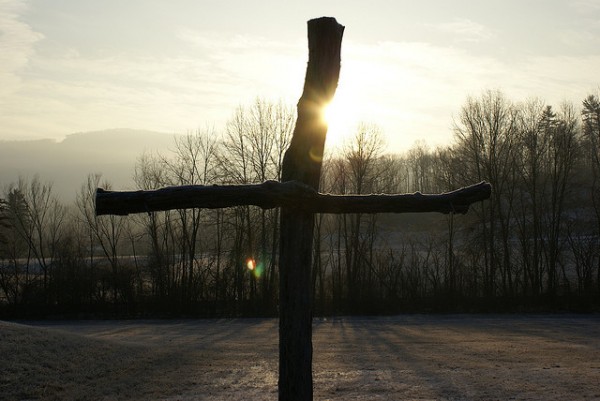 Therefore [Abraham’s] faith “was reckoned to him as righteousness.” Now the words, “it was reckoned to him,” were written not for his sake alone, but for ours also. It will be reckoned to us who believe in him who raised Jesus our Lord from the dead, who was handed over to death for our trespasses and was raised for our justification. (Rom. 4:22-24) — Amen.

If you are a regular NPR listener you may remember a few months ago that the notion of “faith” hit the news when the results of a recent Pew survey were announced. The survey showed that “more than a quarter of adult Americans have left the faith of their childhood to join another religion or no religion.”1 There was much discussion at the time about what these results were saying about Americans and our religious convictions. It turns out that we are still a remarkably religious nation, especially when compared to our European cousins. But even as all the news reports talked about this report on “faith” it missed the fact that this was not about faith at all. Rather it was about religion, the set of beliefs that one confesses or espouses and the actions and modes of worship that one engages in as a member of a religious community. For instance, although there was a decline in those raised as Catholics and Methodists who said they remain in those traditions, a large percentage of those same people identify themselves as Christians, albeit now in an evangelical setting. They have not “switched religions” but have simply moved to a different expression of the same religion, Christianity.

What our readings today present us with is the very foundational question of “faith.” I have to admit that I find this topic perhaps only slightly less challenging to preach than the nature of the Trinity. There are all sorts of passages in the Bible that talk about “faith,” each with a slightly different angle or perspective on this fundamental concept.

Hebrews 11 tells us famously that, “faith is the assurance of things hoped for, the conviction of things not seen.” Several years ago I had a student in a class on religious thought and he expressed a frustration with this definition of faith. “Faith is the assurance of things hoped for.” To him, “hope” was merely wishing, like “I hope I will win the lottery,” but faith, he argued had to be something more secure. (This student, by the way, is now finishing up seminary.) “Hope” in this context, however, is not about wishing or wanting something to be true even while knowing that very likely is not. Rather this kind of hope is the expectation of something that has not yet fully come to fruition. Our Christian faith is when we act upon these beliefs.
Faith is belief plus action.

Consider our readings this morning. In Paul’s letter to the Romans he refers to Gen. 15 where we are told that Abraham believed God “therefore his faith ‘was reckoned to him as righteousness.’” You remember the story, God had promised Abraham that his children would be endless in numbers and they would inherit all of Canaan, yet he was extremely old and his wife Sarah was barren, unable to have children. In Genesis 15 God reaffirms his promise to Abraham.

1 After these things the word of the LORD came to Abram in a vision, “Do not be afraid, Abram, I am your shield; your reward shall be very great.” 2 But Abram said, “O Lord GOD, what will you give me, for I continue childless, and the heir of my house is Eliezer of Damascus?”

Abraham points out the obvious to God, that he has promised him children to be his heirs and yet he had none. Notice that Abraham is willing to question God, to challenge God on his promises. This is not the subject of this sermon, but here is a bonus point: we are allowed to challenge God, to remind him, and therefore ourselves, of what God has promised to us. And when we do, like Abraham, we will hear God affirm his promises again in our lives.

4 But the word of the LORD came to him, “This man shall not be your heir; no one but your very own issue shall be your heir.” 5 He brought him outside and said, “Look toward heaven and count the stars, if you are able to count them.” Then he said to him, “So shall your descendants be.” 6 And he believed the LORD; and the LORD reckoned it to him as righteousness.

This is the faith that Paul tells us is counted as righteousness. It is important to realize that Abraham’s “belief” is not simple intellectual assent to a concept. But Abraham believes that God will make his descendants (rather than Eliezer of Damascus’) as numerous as the stars and thus does not pursue the “adoption” of Eliezer. In this case the “action” based upon belief is ceasing an activity. Abraham believed God’s promise to him and so acted accordingly. This is faith worthy of righteousness. Abraham of course goes on to have a few more missteps but his entire story is in fact, one of faith. When God first calls out to Abraham he tells him simply, “get up and go to the land that I will show you…I will make of you a great nation, and I will bless you, and make your name great, so that you will be a blessing.” Abraham heard God and believed that he would indeed bless him and so he got up and went, with no further assurances than God’s word. Faith is not simply believing something to be true, it is acting upon it as well.

In our Gospel this morning we find two stories, each about a person’s faith in Jesus’ ability to heal. The synagogue leader takes a great risk, knowing that his position within his community and synagogue would likely be ruined by associating with this crazy preacher was driven by the necessity of his child. But he also acted on his belief in Jesus’ power to save. “My daughter has just died; but come and lay your hand on her, and she will live.” Did you notice what he said? His daughter was dead. Not just ill or feeling woozy. And yet we know he believed that Jesus could bring her back so he ran to him and said, “lay your hand on her and she will live.”

On his way to see the child a woman who had been ill for 12 years, sick with a hemorrhage, a flow of blood, which meant that for her to touch someone she would make them ritually unclean, reached out and touched the fringe of Jesus’ garment. Why? Because she believed in his power to heal her. She said to herself, “If I only touch his cloak, I will be made well.” There is no wishful thinking here, only the conviction that Jesus could heal her. “I will be made well.” She believed in Jesus and she acted on that belief and she is healed. Jesus reassures the woman who touched his garment, “‘Take heart, daughter; your faith has made you well.’” And instantly the woman was made well.”

Faith is belief plus action. It is not some abstract, esoteric knowledge to which we give intellectual assent. It is the firm conviction of God’s love and power and our response to that belief. If we merely say the creeds and confess Jesus as Lord and Saviour, but it never causes a change in our lives or the way we act then is it really faith? As James tells us, “faith without works is dead.” Had the woman simply said, “I believe that Jesus can heal me,” but was too meek or timid to reach out and touch him, she would not have been healed. Such a belief, no matter how strong one “feels” it, is not transformed into faith until one acts upon it.

Bonus quote:
“Faith is to believe what you do not see; the reward of this faith is to see what you believe.” — Saint Augustine

One thought on “Almost a sermon… “Faith””

There he is, running, excited about the end of a game, his gloves almost twice as big as his hands, shirt blowing […]

The discovery of Herod’s Tomb is making the news in a big way today. The site of Herodium has long been known […]