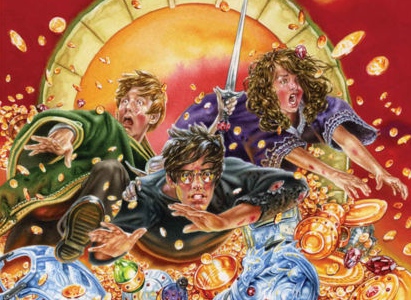 …especially if you have 9 hours in a plane. So yesterday morning I set out from my hotel in Slovenia at 5:30 (yup, AM) for a 7:45 flight to Zürich from whence I would go to Philly and then on to State College. But shortly after checking in I was told that my flight had been canceled, they were rerouting me through Frankfurt and I would miss my connecting flight. In the end, I rented a car and drove the last 3.5 hours rather than stay a night in Philly (there are only so many flights to State College).

So, what does this have to do with HP7? Well, let’s just say, I had some time on my hands and the sandwich shop in Concourse C had a copy of the UK version of The Deathly Hallows. I will not give away any details. I don’t believe in spoilers, I just read them. (I found the epilogue on line last Friday. I tend to start at the end anyway. As I said to someone who objected to this: “We know that Jesus is crucified and raised from the dead, but we read the story anyway, don’t we?”) So I read all but about 200 pages on the plane (I am a slow reader) and finished it just now. I will only say that Rowling has done a very good job. I have never felt her prose was the best or her created world the tightest or most consistent, but this is a thoroughly satisfying book and conclusion to the series.

Oh, I also saw The Order of the Phoenix the night before leaving Slovenia. This book is the longest in the series yet the movie is (I believe) the shortest. It is not the best movie of the lot. It is OK, but so much has been left out that is in the novel that I wonder if those who have not read it will understand the import of various elements. It is also pretty dark, so our 3.5 year old is staying home with me tonight while the girls go and see it. Definitely worth seeing, but don’t get your hopes up.

(BTW, I was right about Snape!)

As I mentioned yesterday this weekend we took the kids to see the new Pixar film Up. (I could have sworn there […]

This story is from the NOLA Times-Picayune. It reminds everyone of the good work still being done by the church in New […]

Today was a great Easter! A beautiful day and a wonderful luncheon with friends. Tomorrow I hit the road for the week. […]

It has been a productive week! Not only have I nearly completed my paper for the conference, but I have met with […]