{I did not mean to do a live blog myself, but after writing many paragraphs and it is 10:40 pm I guess I have indeed made my own. Mark’s is still better so be sure to go to his site. }

I missed the first few minutes (any other parents fall asleep while putting your children to bed?) but Mark Goodacre has a blog-by-blow blog going. This is another busy week, but I will try and post my thoughts at some point. So far…

Well, as I am watching this there are too many points to take issues with. At the moment they are doing the Da Vinci Code all over again, citing later texts (Gospel of Mary and the Acts of Philip) as being as or more authoritative than the canonical Gospels. And now the Acts of Philip holds “the key” to the “Mariamne” ossuary.

I will have to go over the data and arguments for the names more carefully, but so far they seem to be having to make a special argument for every single one in order to get it to fit their reconstruction. For example, why would this peasant Galilean family have the matriarch’s name in a Latinized form “Maria” and Mary Magdalene’s name in Greek, as they are arguing?

Oh! Now they are taking hook-line-and-sinker the theory made famous by the Da Vinci Code that MM went to France (but then back!). And now they hit a tomb but not “Jesus'” but one that still has ossuaries in it.

I am trying to say open minded, but this is starting to sound far too sensational and consipiracy driven. (And almost anti-Catholic as well, with several digs at the early church fathers who destroyed documents that would show women were ordained, Simon bar Jonah [Peter] ossuary found and no credible evidence of Peter in Rome, and so on.)

Now we are on to the DNA testing… (CSI: Jerusalem!) So the fact that the two samples (“Jesus” and “Mariamne”) were not related is significant? Oh, they are saying that in a family tomb this would mean that they were husband and wife. I don’t know enough about family tombs of the period to say that this would be unexpected, but it seems to mean all that you could say is they are not related. Period. To go on to say that because they are not related “they most likely would be husband and wife” is a step beyond the evidence. It is inference and conjecture, perhaps the most likely…but a conjecture. So now that they have the DNA does that mean we can compare it with that of the Merovingians?! I guess they won’t go that far.

They have found the tomb, I will let Mark’s blog fill you in better than I can summarize now. Now we are on to the suggestion that the Jame’s ossuary was the “missing” 10th ossuary. What is ironic is the way in which the documentary takes at face value the NT references to James and talks of how he took over the early movement after Jesus. Tabor is now arguing that the 10th ossuary is indeed the Oded Golan ossuary, citing the stated dimensions as matching that of the records from the Talpiot tomb. Now we are getting to the patina… As I recall, the patina is one key part of the James ossuary argument of authenticity. Indeed, Tabor makes mention that no one really doubts that it is a real 1st century ossuary and many accept that part of the inscription may be original. Commerical break.

Charles Pellegrino has taken teh patina samples to a crime lab in NY. The “signatures” match from James and “Mariamne” and their “random” samples do not match. I did not catch where those were from. Where they from tombs in and around Jerusalem? They now lift the probability factor to 1 in 30,000.

Now we are onto the child’s ossuary that was removed. It bears the inscription “Yehuda bar Yeshua,” Judah son of Jesus. “If Jesus had a son, his identity certainly would have been kept a secret.” Oh! Clever! They suggest that the “unnamed beloved disciple” is their son!

They are concluding now suggesting that there are just too many coincidences in names for this to be the tomb of anyone other than the Jesus of the New Testament.

Now, on to the panel discussion with Ted Koppel! Oh rapturous joy.

[pullquote]I try very hard not to be like some bad Saturday Night Live sketch where all I mention is death; sort of a theodical […] 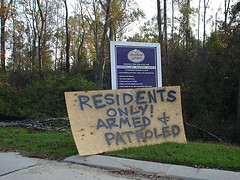 If you follow my twitter feed (and no reason you should, do you really want to know what I ate last night?) […]

This is really amazing and wonderful news. I will simply post it in its entirety from Stephen Cook’s blog: Virginia Seminary Waives […]