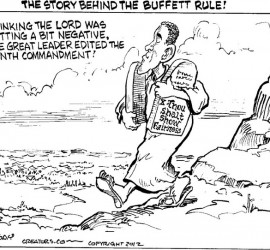 What is “fair”? This post is not about “the Buffet rule,” but it is. That is to say, the proposal itself is obviously fairly complex and I think does deserve consideration (but Annenberg has found that this argument is fundamentally flawed in that “— on average — high-income taxpayers pay higher rates than those in the middle, or at the bottom for that matter”). What this post is about is rhetoric and morality. The Democrats such as […]