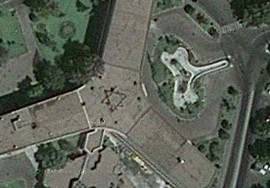 The Jerusalem Post (in a section that is in this instance oddly titled “Iranian Threat”) reports that Google Earth images reveal that the Iran Air headquarters has a Star of David on its roof. The building was built prior to the revolution by Israeli engineers and the Jewish symbol has gone unnoticed for over 30 years. Putting images on roofs in hopes that Google Earth will capture it is a recent phenomenon so clearly these […]