I am a root beer lover. I have never tried to make it, although tempting, but I love me a good, cold mug of root beer. The NY Times has a great article on this elixir of the gods.

WHAT is it about root beer? 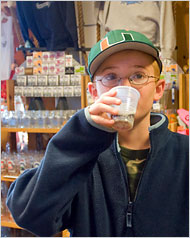 No soft drink incites the passions the way root beer does. People love it or they hate it, but they don’t ignore it. Few sodas have the mystique of a frosty mug of root beer.

Nobody chugs root beers mindlessly the way a reformed smoker downs Diet Cokes. Instead, people dissect them and analyze them. They debate the merits. They break down the formula, if they can. They might even try to make root beer themselves.

Sodas of The Times: Root Beer

Tonight is the first film in our local series “The Reel Jesus.” Here are my opening words. Reel Jesus Introduction Good evening. […]

A quick review of higher education news highlights. As I sit with my cuppa tea this morning and read the Chronicle of […]

The late Johnny Hart, creator of BC, was known for his outspoken Christian beliefs and incorporating them into his comic. His Easter […]

Yesterday I read with mild interest Bono’s guest column in the NYTimes and even thought about blogging on it. Upon reflection I […]