The following is an excerpt from my forthcoming book, Beautiful and Terrible Things: A Christian Struggle with Suffering, Grief, and Hope. My father died on Maundy Thursday 2019.

As my mother and I sat by my father’s bed in the ICU, we began to talk about plans for his funeral—not immediately, but after a day or so, when it became clear that his perishable body was ready to yield to the imperishable. Mom said she knew Dad wanted a service like Mack’s. She said they both loved how it was focused not upon the deceased, but on the resurrection of Jesus. Ever since my father had given his life to Christ as a teenager, his devout wish was to share the Gospel with others so that they might know Jesus as he did, as their Lord and Savior. This was so much a part of his being that in an earlier hospital visit, while they thought he was asleep, Dad suddenly awoke, looked at the nurse checking his IV and croaked, “Do you know Jesus?” He was a gentle man in his witnessing. He wouldn’t tell you that you were going to Hell, but he did want you to know Jesus as he did, he wanted you to join him in eternal life. And that was what he wanted at his funeral service, not an encomium about his life, but the declaration of Christ crucified and risen from the dead.

This is the hope of the resurrection. The firm conviction and sure promise that just as Jesus was raised from the dead, so too will we. I was raised in a large, evangelical Presbyterian Church and the Episcopal service that Mom and Dad had so liked was new to them; it was simply “The Burial of the Dead” found in The Book of Common Prayer. It begins with the proclamation, “I am the Resurrection and I am the Life, says the Lord. Whoever has faith in me shall have life, even though they die. And everyone who has life, and has committed themselves to me in faith, shall not die for ever” (John 11:25-26). In many ways, it is like all the other services in the Anglican tradition and found in The Book of Common Prayer. The reading of Scripture and the proclamation of the Gospel is at the heart of the service, followed by the congregation affirming the Christian faith in the words of the creed (in this case, the Apostle’s Creed) and the people praying together and responsively. The Eucharist, or Communion, may be included, as we did at Mack’s service, and that further draws the community together around the sacrifice of Jesus that has transformed this death from an ending of life into the beginning of the new, eternal spiritual life. For as Paul wrote, and is read in the service, “What is sown is perishable, what is raised is imperishable… It is sown a physical body, it is raised a spiritual body” (1 Cor. 15:42, 44). This is the hope that my father believed fervently, it is at the heart of the Gospel, and it is the promise that God has made to all creation through Jesus. It has brought me great comfort, but I admit it is not always easy to hold on to hope.

The Challenge of Hope

Shortly after Mack died, a colleague from the university came by my office. She was a development officer, the mother of one of my students, and a member of our parish. She brought with her two identical, small framed quotes from Sister Joan Chittister; one for me and one for my wife. At the time, I had no idea who Sister Joan Chittister was. Now I know her writings (although not as well as my wife, who is a devoted reader of her works) and have come to appreciate everything from her commitment to the Catholic Church and its reform (whether the leadership want it or not) to her thoughtful, spiritual, contemplative writings. The framed gift given to us within weeks of Mack’s death had a simple drawing of a heart, whole yet with lines through it like stained glass, and a short quote that was direct and to the point. “Hope is the ability to believe that good can happen out of anything.” The intent of the gift and the sense of the quote is to encourage us that no matter how difficult things become, there is the possibility of redemption. Something good can yet emerge out of the darkness.

Paul offers us those three pillars of spiritual strength of faith, hope, and love, and while he says that love is the greatest of the three, it is in hope through faith that we are able to love. When we are at our lowest, even when we are unable to love ourselves let alone someone else, it is hope that gives us the strength to move forward. That is the truth in Sister Joan’s statement, and it moves us beyond Paul’s reflection that this current suffering is nothing compared to the joy we will experience. Sister Joan is encouraging us to see that while we cannot change the past or how we got to this present moment, we know that God is with as we choose to move forward and will redeem the experience. We operate then in the hope of the future work of God in our lives as we acknowledge God’s current presence in our lives, his entering into our own history, and that the Holy Spirit is at work in our lives.

There is, perhaps, no word with greater ambiguity and yet more discussion of its meaning than “hope.” In everyday parlance, it can carry the sense of wishful thinking, a desire for some outcome or something to be true without any evidence that it ought to be true. That notion is not new, and for many, hope is simply fantasy, baseless positive, personal psychology. Throughout history, some have thought of hope as an evil that causes people to refuse to acknowledge the harsh reality of life.

The story of Pandora is an ancient theodicy, an attempt to explain evil and suffering in this world. The ancient Greek poet Hesiod tells us that after Prometheus stole fire and gave it to men (not humanity, as there were only men at this point), Zeus wanted to punish men and so ordered Pandora to be created out of the earth, the first woman. Pandora brought with her a jar (often mistranslated as “box”) that contained all manner of pain, disease, evil, and hope. When the jar was opened, all of these flew out except hope; “only Hope was left within her unbreakable house, she [hope] remained under the lip of the jar and did not fly away.”[i] Thus evil entered the world. But not hope. There remains debate to this day as to whether the fact that hope remains in the jar is a mercy or further punishment. Some in antiquity thought that hope was an evil. It draws one away from actually living, engaging in the present, real world. Philosophers throughout history have taken similar views. Although Nietzsche softened his position with age, his earlier statement represents a significant stream of thought: “Zeus did not wish Man, however much he might be tormented by the other evils, to fling away his life, but to go on letting himself be tormented again and again. Therefore he gives Man hope, in reality it is the worst of all evils, because it prolongs the torments of Man.”[ii] That is the evil many see in hope; it provides unwarranted expectations that life may get better and thus prolongs our torment in this life.

That is not the biblical view of hope.

Hope is, of course, always a looking forward, an expectation of something that has not yet happened. In the biblical context it is looking forward to the Day of the Lord, the resurrection, and the re-Creation of all things. The hope of Christianity, however, is not a baseless, unwarranted expectation. It is grounded in the witness of the resurrection of Jesus and the promises of God. It is the testimony of others who have called out to God and felt the presence of the Holy Spirit in their lives and seen God’s power at work, transforming the darkness into light, bringing good out of anything. It is upon that basis that we hope and “look for the resurrection of the dead and the life of the world to come.”

Yet living in the hope of the resurrection is not escapism. Christians and Christianity acknowledge fully the hurting and hurtful nature of this world. In Paul’s great passage on hope, Romans 8, he describes creation itself as groaning in anticipation of its redemption. “For the creation waits with eager longing for the revealing of the children of God…in hope that the creation itself will be set free from its bondage to decay and will obtain the freedom of the glory of the children of God.” The hope of the resurrection is the looking forward to when all creation, heaven and earth and humanity, will be all transformed into the glory that God intended for us at the outset. Meanwhile, we continue to live in this world, even as we look and work with expectation for the world to come, in the sure hope of God’s kingdom come.

No, hope is not escapism, it is essential. Brunner opens his study by observing the absolute necessity of hope for all humanity. “What oxygen is for the lungs, such is hope for the meaning of human life. Take oxygen away and death occurs through suffocation, take hope away and humanity is constricted through lack of breath; despair supervenes, spelling the paralysis of intellectual and spiritual powers by a feeling of the senselessness and purposelessness of existence. As the fate of the human organism is dependent on the supply of oxygen, so the fate of humanity is dependent on its supply of hope.”[iii]

[ii] Friedrich Nietzsche, “Hope,” in Human All Too Human, 1878. By enabling Pandora to close the jar with hope remaining within, Nietzsche argues, Zeus kept hope ever tantalizingly close to humanity. “Now for ever man has the casket of happiness in his house and thinks he holds a great treasure; it is at his disposal, he stretches out his hand for it whenever he desires; for he does not know the box which Pandora brought was the casket of evil, and he believes the ill which remains within to be the greatest blessing, it is hope.” 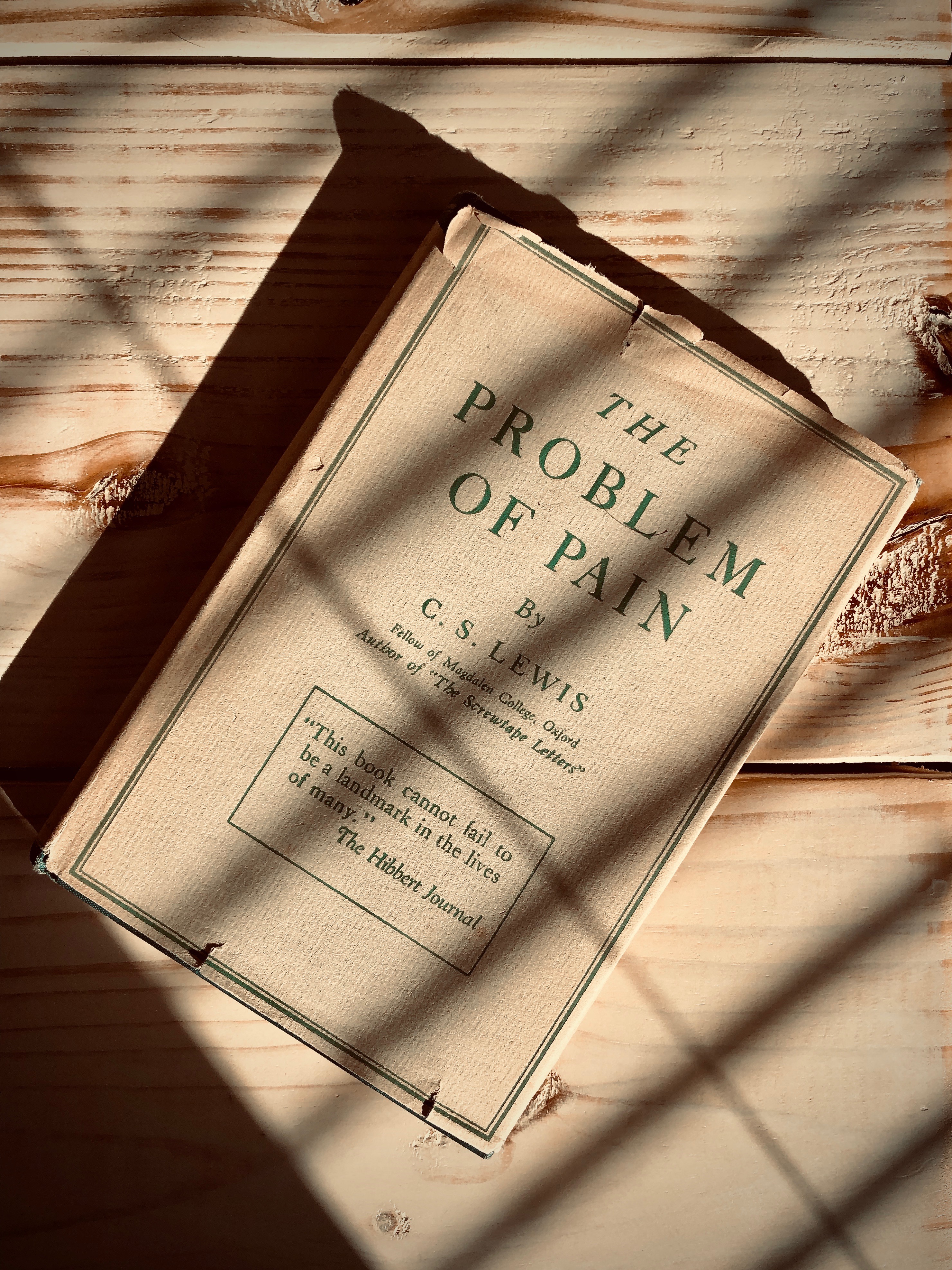 It turns out, judging by the notes in the margin, I had read C. S. Lewis’ The Problem of Pain some time […]