Last week Bill Cosby was honored with the Mark Twain Prize for American Humor at the Kennedy Center. It was shown on PBS tonight and if you can watch, by all means do!

Cosby is without a doubt the best, funniest, and smartest comedian of the last 75 years. Don’t argue with me! Jerry Seinfeld said that, although he does not really know Mr. Cosby, he has been the guiding light of his career. Well, I am no Seinfeld, but Cosby’s comedy has had a greater influence on me than I think most realize.

Do you get it? Of course you do. Bill Cosby is funny without resorting to the f-bomb, the s-word, or any other profanity.1 His comedy still brings tears to my eyes and who can top Noah?

Mr. Cosby is not perfect, in fact, there have been some very serious accusations against him over the years. But he’s not Jesus so I will cut him some slack. He continues to be a great example to so many and I am grateful for the example, and the escape, that he gave me when I was growing up. Congratulations Mr. Cosby, you deserve this award. And thank you.

And who Lucifer was. Non Sequitur, by Wiley. 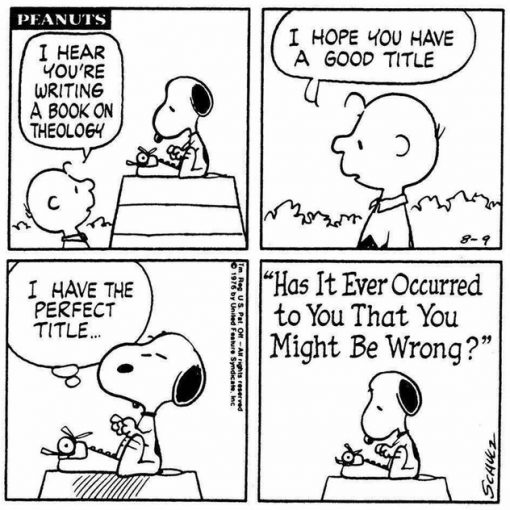 Sparky passing along wisdom via Snoopy, as always. Charlie Brown: I hear you’re writing a book on theology. I hope you have […]

Politics? Or is that just me? 😉