You know about my love for the show, John Bloom got to interview the minds behind the mastery. This is a great article. Looking for the Best Christian on TV – STUDIO 60 What I’ve come here to ask these guys is: What’s the deal with the believable three-dimensional Christian character in this new series? Have they lost their minds? I mean, really, the character of Harriet Hayes, a conflicted, unlucky-in-love, tough-but-vulnerable cast member of […] 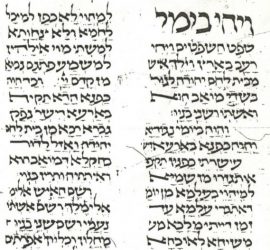 Or not… I am working on a book proposal for an Anglican publisher that will offer a study of the Megillot, or “Five Scrolls.” This canonical division is, as most of you know, Jewish not Christian, but there are good reason, IMHO, for dealing with them together. So in writing my proposal it occurred to me to check and see how often these texts are read in either the Book of Common Prayer’s lectionary or […]

Ecumenical study shows why congregations grow A plan to recruit and incorporate newcomers, clarity of mission and ministry, contemporary worship, involvement of children in worship, geographic location, a website and the absence of conflict are key factors in why some congregations in America are growing, according to the latest national survey of U.S. faith communities. I haven’t read the whole story or the study it is reporting on. Of interest is the statement The report […]

Thanks to CH for passing this along! I will definitely bear this in mind when I come to grading this semester. Innovative grading systems Daniel J. Solove at Concurring Opinions has posted a helpful Guide to Grading Exams. Those of you in higher education may wish to incorporate this information into your spring semester syllabi. (Via Higgaion.)

The NTCS Home Page has moved! I am the internet editor of the newsletter and since I am no longer at Tulane we are moving the site. Unfortunately when the domain targum.org expired someone snatched it up and is now demanding payment for it so… Targum.info is the new domain name! Please update any references you may have on your sites (and I am going to edit the Wiki entry today). This is also the […]