As a long time Mac user I am glad to see not only the resurgence of Apple Corp on campus, but that PSU is very heavily Apple. Inside Higher Ed has a biblical twist with their opening sentence of this story.

In the beginning, there was Apple.

“At one point, the Mac was the hot box on campus, for those of us who have gray hair,” said Kenneth C. Green, founding director of the Campus Computing Project, which studies the role of technology in higher education. “Apple has now tried to position itself as the hot box again.”

Some of us with less gray hair remember it as well. When I walked in my new office on August 7th everyone was on Windows machines. I am platform anglican in that I am happy for each to choose their own OS (just get the job done®). Interestingly enough, after my machines came in (an iMac and a MacBook) several have said they were forced to go to Windows and would love to move back to the Mac OS…

(Via Inside Higher Ed.) 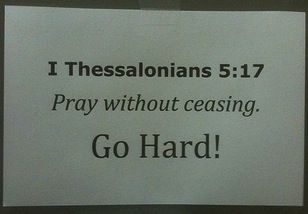 I “found” this in a bathroom stall at a local church. It’s true. I took it with my iPhone. What kind of […]

And unfortunately this is where our priorities are:

The day is waning and time for bed. First, to read some comics and unwind. *sproing* # Larry Lesing is opening the […]