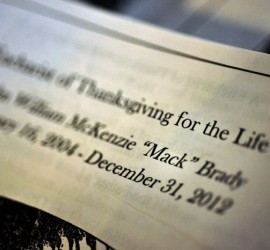 Shortly after Mack died our good friend and colleague Gary Knoppers gave me Nicholas Wolterstorff’s Lament for a Son. Gary included a brief note, offering his condolences and sharing that NW had been one of his “main profs” at Calvin and that Eric, the son who had died in a tragic accident, had been his friend and housemate. Gary died shortly before Christmas, taken far too early by cancer, but leaving an incredible legacy of […]