Many of you are probably already familiar with Ship of Fools, a great Christian parody and humor site. Each year since 1999 they have presented the “12 Days of Kitschmas,” various gifts that are (often unintentionally) funny. This year I have to report on one in particular. This is a “caganer,” something that I had never heard of before. Wikipedia tell us:

In Catalonia, as well as in the rest of Spain and in most of Italy and Southern France, traditional Christmas decorations consist of a large model of the city of Bethlehem, similar to the Nativity scenes of the English-speaking world but encompassing the entire city rather than just the typical manger scene. The caganer is a particular feature of modern Catalan nativity scenes, and is also found in other parts of Spain and southwestern Europe, including Salamanca[1], Murcia (cagones), Naples (cacone or pastore che caca) and Portugal (cagöes)[2]. Accompanying Mary, Joseph, Jesus, the Shepherds and company, the caganer is often tucked away in a corner of the model, typically nowhere near the manger scene. There is a good reason for his obscure position in the display, for “caganer” translates from Catalan to English as “pooper”, and that is exactly what this little statue is doing — defecating.

My favorite explanation from the wiki article is: “The Caganer, by creating feces, is fertilizing the Earth. However, this is probably an a posteriori explanation, and few cite this reason for including the Caganer in the Nativity scene.” Get it? “a posteriori”? Ha!

And here is the Ship of Fools gift for the 6th day. Warning: the picture is, well, “graphic.”

“Ox and ass before him bow,” we sing. And if you thought that was just about donkeys, look again. Quietly, reverently, Papa Benny delivers a full papal moon at the nativity, then deposits a humble offering on the ground – a close encounter of the turd kind.

Caganers are traditional figures made for Catalonian manger scenes. Along with Mary, Joseph and the rest of the Christmas cast, the Catalans also dump a character in a corner of the stable, with his pants down, quietly doing his business. Some say it’s just for laughs. Others think there’s an important theological point being made about the earthiness of the incarnation. 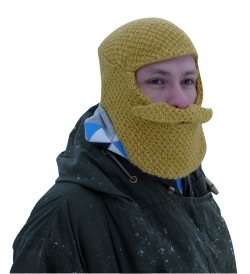 That sounds a bit rude, but that is what they call it. It is almost a shame that winter is nearing an […]