Tomorrow is a BIG game day here in Happy Valley. I admit to not being all that confident of our chances, but I think we will hang tough and if we are in it in the last 2 minutes, we can win. So turn on ESPN for GameDay and enjoy the view! I will be there, likely with face painted white and blue, trying to get my mug on TV. 🙂

The program will air from 10 a.m. to noon ET, with other live segments throughout the day, as well as on Friday afternoon. The broadcasts are open to the public. The No. 24 Nittany Lions and No. 1 Buckeyes will kick off in Beaver Stadium at 8 p.m. Saturday on ABC, the Penn State Sports Network and GoPSUsports.com online.

In addition, ESPN Radio’s College GameDay program will originate from outside Beaver Stadium on Saturday. Scott Reiss is the host and is joined by analysts Todd McShay and Trevor Matich. The program will air from noon to 7 p.m. on Saturday and the public may attend.

This year marks the 14th consecutive season College GameDay Built by the Home Depot is originating from the site of the day’s best game. College GameDay airs at 10 a.m. every Saturday during the football season. Fowler, Corso and Herbstreit are in their 12th season together on College GameDay.

Saturday’s broadcast marks the fourth time College GameDay has originated from Penn State. In 2005, the program also aired for the visit by Ohio State. That show delivered an average of 1.86 million homes and a 2.1 rating, which ranks No. 2 among viewers for a Saturday morning edition of the program. Only last yearï¿½s Ohio State-Michigan program delivered a larger audience than the 2005 show from Happy Valley.

College GameDay also originated from Penn State for the 1999 Pigskin Classic against Arizona and the 1997 game against Michigan.

A “Rally in the Valley” is set for 8 p.m. Friday at Rec Hall and a Student White Out has been declared for the showdown with Ohio State.

One thought on “PSU v. OSWho?” 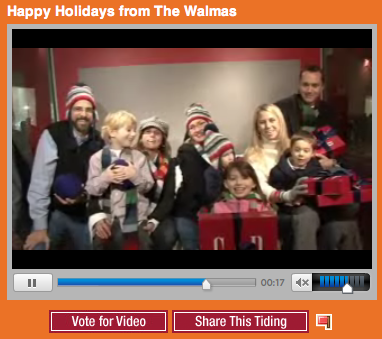 What would Christmas be without competition? When we were in NYC we saw and participated in Gap & Yahoo’s Christmas Greeting video. […]

I have now been shown the BEST ever footnote. BTW, does anyone have the citation for this one? via Marc Cortez Honest-footnote | […]