This past summer I wrote a series of devotions that were published on the Emerging Scholars Network blog1. Over the course of this week I will published them here on Targuman. I encourage you to take a look at ESN and consider supporting and contributing yourself. We will be holding a meet-up at this SBL this November, if you are there I hope you can join us! 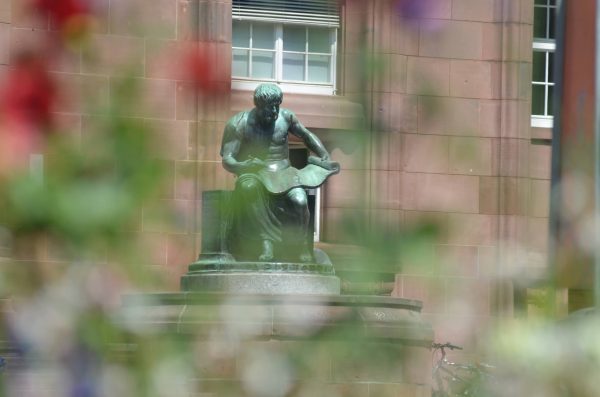 Sometime in my junior year a faculty member spoke to our InterVarsity chapter. I remember distinctly one element of his talk, a quote in German that he attributed to Luther: “Das Denken ist auch Gottesdienst.” The message that “thinking is also worship” was intended to encourage us to remember that even if our careers took us into fields where we were “thinking” rather than “doing” we could still serve God (the literal meaning of “Gottesdienst”). It is a message that has stayed with me and a few years ago I set out to track down the origin of the quote. After all, a good scholar must always cite their sources.

What I found was a bit surprising and surprisingly obscure. The quote was not from Luther; it was from Hegel. The philosopher Wilhelm Friedrich Hegel (1770-1831) was and remains incredibly influential for philosophers and theologians alike, yet the orthodoxy of his beliefs relative to Christianity remains in debate. The quote itself was particularly difficult to track down. With the help of the scholar Jason Staples, the earliest source seems to be from 1885, in Philip Schaff’s History of the Christian Church. While discussing the theology of John Scotus Erigena (who wrote his work on predestination in 850) Schaff notes that his view is similar to those of much later philosophers like Hegel:

With [Erigena] church authority resolves itself into reason, theology into philosophy, and true philosophy is identical with true religion. Philosophy is, so to say, religion unveiled and raised from the cloudy region of popular belief to the clear ether of pure thought.

At this point Schaff offers the following footnote:

So it was with Hegel. His pious widow told me that her husband often politely declined her request to accompany her to church, with the remark: “Mein liebes Kind, das Denken ist auch Gottesdienst.”

At first, “thinking is also worship” may seem a reasonable response in the context of this anecdote. The reason he does not go to church is because he is serving God right where he is so long as he is “thinking.” But this is not the fully positive spin that was placed on it when I first heard the phrase cited in an IV meeting. For Hegel it seems more of an excuse to avoid services (and placate his wife’s concerns) than an admonition to bring all our lives, thoughts included, into the practice of worshipping God. He need not go to church because, as Schaff phrases it, “the clear ether of pure thought” is Gottesdienst.

So, what of my original reception of the quote and the message presented to us back in 1989? It seems that when Hegel uttered the phrase it was not intended as an encouragement to Christian intellectuals. It seems to me that it serves as a warning to scholars of the opposite inclination, that we not follow Hegel’s example of elevating one’s own philosophical musings to divine action itself. Instead I think we can find a far more straightforward word of encouragement in Scripture itself:

Col. 3:17 And whatever you do, in word or deed, do everything in the name of the Lord Jesus, giving thanks to God the Father through him.

Paul has no doubt that everything we do, whether that is an action or our very speech, has the capacity to glorify God if it is done “in the name of the Lord Jesus.” The phrase “in word or deed” is a merism which encompasses all of our activities in life. So it does not matter whether our doing is thinking or making, speaking or acting, it can and must all be done in worship and thanks to God through our Lord Jesus. And it was Jesus who reminded the lawyer (Matt. 22:34-40) that the greatest commandment required that we love God completely and fully.

“The fear of the LORD is the beginning of knowledge; fools despise wisdom and instruction.” Guide us Lord, as we seek to worship and serve you even in the thoughts of our daily work. We pray that we might always remember that our scholarly musings, cogitation, and reflection are made possible by and through you. And grant us the humility to always be in awe of your revelation to us; always will to receive wisdom, instruction, and correction; that in this, as in all things, we would give thanks and praise to you who created this world through your Word that is light and life to the world.

If history is any guide, I will be posting a few Easter-themed cartoons over this week. Let’s start with this one about…what? […]

What do you think? Does God advertise?

I have been thinking about the future of Jerusalem as part of a project for my class on leadership and critical thinking. […]