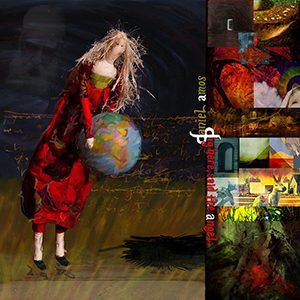 My last entry was about envisioning heaven, the resurrection, and all that. It came about as a coincidence of my speaking with a colleague on the subject and then reading an interesting interview with Marilynne Robinson that touched on the subject. Another coincidence is my receiving the most recent (and first in 12 years) album from Daniel Amos Dig Here Said the Angel

. I have written a bit before about this group that began in the 70s and even shared lyrics from this most recent album, even before I had the disc in hand. I have followed them since the mid-80s and have found Terry Taylor’s lyrics and singing regularly compelling. Their work is so diverse I cannot (and I am not sure any can) do justice to their breadth and scope of it all. Suffice to say that this album’s theme of death, struggle, and new life are timely in my life. I have just begun to listen to the album, but others far more eloquent and better versed in music reviews have and you should read what they have written. I will quote just a bit from Fred Sanders‘ review.

“I sell records worldwide now that I’ve died,” boasts the singer in one of the tracks on the new Daniel Amos album, Dig Here Said the Angel.  The character is a musician, obviously, but postmortem, and somehow (As a ghost? In a dream?) he’s assuring his still-living spouse that everything’s great for him since his death:

I lost my stiff, stiff neck and my hard, hard heart,
My self-respect is off the charts,
Just hanging out here on the other side
Dead to my pride, now that I’ve died!

He doesn’t say much more about his heavenly musical career, aside from mentioning that “the music round here is just my style,” which seems as important as the fact that “the cuisine here is pretty fantastic.” What he really wants to communicate is the unthinkable transformation he’s experienced: “Imagine me all honorable and faithful,” and

I love my neighbor as I love myself,
I’m loved by God and I’ve got my health.
I’m going strong and becoming wise:
I couldn’t lie if I tried, now that I’ve died!

The singer’s so excited about life in this kingdom after death (“the rich serve the poor, and the poor are the rich… it’s kind of hard to describe”) that his line about selling records is a bit of a throwaway; clearly his mind is on bigger and better things. For a 5-minute rock song that doesn’t take itself too seriously, it’s quite a glimpse of the beatific vision.

A beatific vision indeed. Imaging, living into the vision, that is a pretty good and healthy first step. “May light perpetual shine upon those who puts their trust in you.”

2 thoughts on “Another look at the afterlife, this time in music”

Too good not to share. Cartoons from the Issue of December 19th, 2011 : The New Yorker.

I am trying to be very open about the proceedings and musings coming out of Lambeth, but I can’t help but snipe […]