UPDATE: It came in! In fact, I called the store, asked if it had arrived. I was put on hold and (later told) the FedEx guy walked in (after I had called mind you) with the delivery, including my iPhone. 🙂 I am a happy camper. So much nicer and easier to use than the BlackBerry.

I am hoping that it has actually been delivered to the store and their system is just being wonky.

5 thoughts on “FedEx Fail Tease – Waiting for my iPhone” 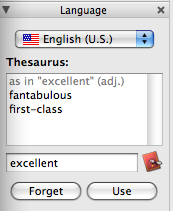 Nisus Writer Pro, a must for Mac users writing in/with right-to-left languages IMHO, has a nice feature. It automatically suggests synonyms for […]