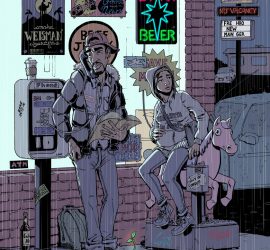 UPDATE 2017: I originally posted this two years again, when it was first produced. It has been making the rounds again unattributed so I wanted to be sure folks could find Everett’s site. But on looking at it again this Advent, I was struck again by how right he got this. His interpretation accurately depicts the sense of the original context, the pregnant mother and anxious father just looking for a place to rest. Not […] 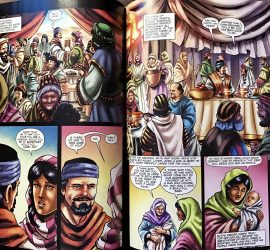 UPDATE: See my comment on the end about suitability for children. My wife and daughter, knowing that I love comics and cartoons, bought me The Action Bible for Christmas. I was very excited! The artist Sergio Cariello is excellent with Marvel and DC Comics credits to his name. Unfortunately his beautiful work is completely undermined by the poor choices in story telling. Doug Mauss is listed as the editor, which leads me to believe that it […] 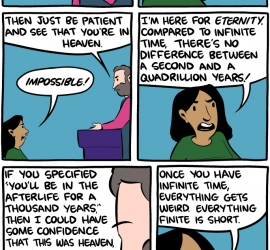 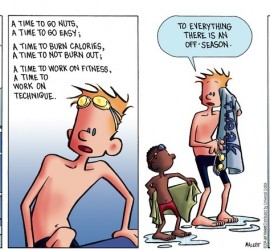 Jef Mallett’s titular character “Frazz” is a janitor, song writer, and triathlete. If you are unfamiliar with his work, it really is great. He is witty, smart, and insightful. To be fair, sometimes too much so as it borders on preaching. You would be forgiven for thinking that this was Calvin and Hobbes in new clothes. Clearly the first strips of this year are heavily influenced by Watterson (but then again, which cartoonist is not today?). In […] 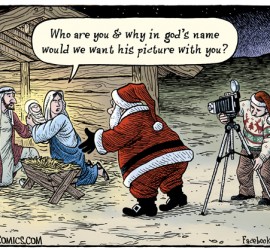 Looking over the site statistics I found quite a few people stumbling across a post from 2009 with some Christmas-themed comics. I have already posted a few of my favorite comics and included current, Christmas examples. It occurs to me, however, you can never have too much of a good thing. So here are a few more from Dan Piraro of Bizzaro fame, Berger & Wyse by Pascal Wyse and Joe Berger, and The Buckets by Greg Cravens. […]

Since I cannot possibly give everyone who reads this blog or has shown such care for us this year a gift I thought I would offer a few posts recommending my favorite things. In part 1 I share the comics I never miss. As a way of de-stressing I read comics, a LOT of comics. But I read most on cruise control. These are the ones I make time for every day. The Norm – […] 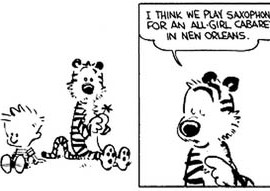 Since I have been thinking about it a lot lately… The first is from a strip called “Cow & Boy” that is, sadly, ending this year. The second and third, well, I think you will recognize it. (Quick aside: Our rector in Louisiana who is currently a bishop in ECUSA knew Watterson in College.) 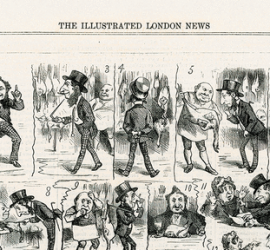 If you read this site with any regularity you know that I love comics. Today I noticed that GoComics.com has started a new “strip” that will showcase some of the oldest newspaper comics and thus provide a history to their origins. Should be well worth a daily look! About Origins of the Sunday Comics This is where it all started! From the Yellow Kid and the Katzenjammer Kids to Little Nemo and Little Jimmy, these […] 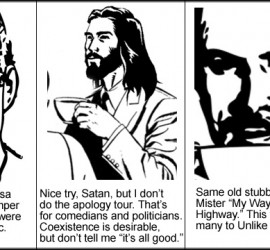 UPDATE: In the comments many asked if books were available and they are! Pick them up at Amazon. I do not know how I have missed this. Radio Free Babylon has an ongoing strip called “Coffee with Jesus” and he is surprisingly “Jesus-like” IMHO.1 Quite funny if you can avoid being easily offended. Here are two that made me smile.   I have never come across “Radio Free Babylon” either, so I offer no valuation […] 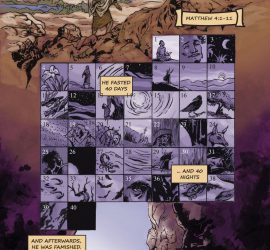 Of Jesus, not the musical group. An Episcopal priest and graphic artist Earnest Graham has begun work on Matthew and has posted Matthew 4:1-11. The images are free for use in ministry, check ’em all out. via Look Both Ways: Life at the Crossroads of Art and Faith: Bible Comic: Matthew 4:1-11, The Temptations.