As usual, it is probably better heard than read. The audio is here.

“The saying is sure: If we have died with him, we will also live with him”

It is tempting to preach from the Epistle for today, but as a textual scholar, Paul’s injunction “warn them before God that they are to avoid wrangling over words, which does no good but only ruins those who are listening” (2 Tim. 2:14) hits a little too close to home. So, I will pass this by and we will consider this morning the Lord’s admonition to the Jews living in exile and how to live in this time of exile.

Last week we read from Lamentations, those five powerful poems of grief about the destruction of Jerusalem by the Babylonians. In faith, the poets challenged God, confessed their sin, and implored God to grant them mercy and grace.

In today’s Old Testament reading, the prophet Jeremiah is writing to those Jews who had been taken into exile by Nebuchadnezzar, King of the Babylonians. The Babylonians had taken the leaders, princes, and priests to Babylon and there, the rivers they laid down and wept.

I have mentioned before that I find the prophet Jeremiah to be an amazing figure. He lived and preached throughout the buildup of the Babylonian empire against Judah and “until the captivity of Jerusalem in the fifth month” (Jer. 1:3). He encouraged the good King Josiah to call Israel back to the Law and helped to lead the reforms of Josiah that promulgated the Law and saw places of idol worship torn down. And when Josiah died, Jeremiah continued to call the kings and people of Judah to repent of their sins and accept God’s punishment of being the servants of Nebuchadnezzar.

This is what was so hard about hearing the prophecies of Jeremiah. Not only did he tell the people, kings, and priests that they were neglecting God’s Law, a Law that said they should, for example, forgive debts (the real, actual, financial debts) and release their slaves and servants every 50 years (7×7, Lev. 25), but Jeremiah also said they should accept Babylonian rule over them. Their understanding of what it meant to follow God’s Law was so warped that they confused political pride and patriotism with faithfulness to God. So judgment came upon Jerusalem, as Jeremiah had predicted. But in today’s reading we find a very different prophecy, a word of encouragement to God’s people living in exile [this is the first wave]: settle down.

Settle down. That is literally God’s message to his people.

Jer. 29:5 Build houses and live in them; plant gardens and eat what they produce. 6 Take wives and have sons and daughters; take wives for your sons, and give your daughters in marriage, that they may bear sons and daughters; multiply there, and do not decrease. 7 But seek the welfare of the city where I have sent you into exile, and pray to the LORD on its behalf, for in its welfare you will find your welfare.​

The passage goes on with the LORD warning Judah not to listen to the prophets who are telling them to rise up and fight back against Babylon. Instead, they are to pray to the LORD on behalf of the city in which they are exiled! So much for the resistance movement!

So, nice history lesson Dr. Brady. But you are in a pulpit and you are supposed to preach the Gospel. Yes, indeed. And “All scripture is inspired by God and is useful for teaching, for reproof, for correction, and for training in righteousness” (2 Tim. 3:16, next week’s epistle, coincidentally).

Where do we find ourselves today? In exile.

No, we have not been besieged, plundered, and forced to live in a foreign land. But we do live in a world where humanity has sinned and so we, all humanity, have created a foreign land. The world we live in is one in which we all, daily, endure various hardships of physical and mental illness, financial inequality, war, and disease. This creation, not as God created, but as it exists now, is our Babylon. And God’s message remains the same. We are to settle down and “seek the welfare of the city (this world) where I have sent you into exile.”

As God’s people we recognize that we are not yet where or what we will be. The Lord promised Judah that he would restore them and rebuild Jerusalem, after a “Jubilee” time. Cyrus the Great conquered Babylon in 539 BCE and while it would take decades, the Jews would return to Jerusalem and rebuild the Temple. In the same way, we know that God will restore his Creation to the good and perfect condition that he intended.

The Gospel message is that God will restore us and all his creation, establishing a new heaven and a new earth, that the suffering and death of this world is not the end, but merely a time of exile and it shall pass. We and this creation will all be transformed! Our exile will end and this time it won’t end with a long 1,000-mile trek followed by the hard political and physical work of rebuilding a city. No, it will be the end of all suffering, death itself will no longer hold us and we will be raised. Because, as Paul wrote to Timothy “If we have died with him, we will also live with him; if we endure, we will also reign with him.”

In the meantime, like the Jews living in Babylon who were told to settle down and “seek the welfare of their city,” we are to take care of that which he has entrusted to us. We are to pray and seek God’s blessing on this world and all who live in it, because in its welfare we will find our welfare. Even at the beginning, we were placed in the Garden to “till it and to protect it.” We cannot simply ignore the needs of nature and ourselves, thinking “well, all of this will pass away anyway.” No! God tells us to settle down, build homes and families, build communities, and pray for the welfare of all. Take care of this Home and the people who live in it. We will be here for a while, so we must serve God in this time and this place.

We all live in exile, moving ever towards that return and restoration that God has promised us in Christ Jesus. When the lepers asked Jesus for healing and he simply sent them to see the priests, to present themselves cleaned and healed. He did not say, “You are healed,” he simply said, “Go.” And as the leper was walking in obedience and faith from Jesus on his way to see the priests, he saw that he was healed and praised God.

As we walk along this difficult, dark path do we notice the healing that God has already provided us in our lives? Consider where you are today and it may not be the best day you have ever had. You may be hurting, you may be sad, you may feel that you are at your lowest point ever, but the cleansing and healing of Jesus’s work in your life has already begun. Bring all your burdens to Christ in prayer, but take note as well of your blessings and give thanks.

The Jews living in exile in a foreign land were no doubt bitter, angry, and deeply grieved. Their lives had been destroyed and yet God tells them to be at peace, to trust in him and his plan, and to continue to live, to find the joy and blessing in that time, even as they waited for the fulfillment of the promise of restoration. This message remains true for us today.

Elizabeth has compiled a list of resources for those who are grieving and those who want to aid those who grieve. It […] 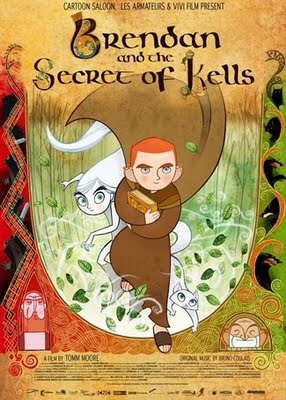 While most of my readers know that the Book of Kells is a gorgeously illuminated book of the Gospels, you know, those […]