Believe it or not, I am still working on my book on Targum Ruth. One of the interesting bits that I came across while doing my translation a few years ago was the translation of MT’s וַיְהִ֗י בִּימֵי֙ שְׁפֹ֣ט הַשֹּׁפְטִ֔ים The Targum chooses to use the term נגיד. 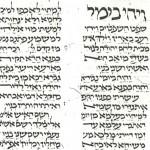 The oldest MS, Valmadonna (V) does not represent both instances of the Hebrew *שפט, and all MSS attest the use of the Aramaic נגיד, most rendering the Hebrew שְׁפֹט הַשֹּׁפְטִים with נגיד נגודיא. There are two primary points to consider here. The first is the grammatical difference and the second is diction. The Hebrew is the Qal infinitive construct followed by the Qal participle in the masculine plural, whereas the Aramaic is a singular masculine noun followed by the plural construct. The MT is usually translated something like “…the judges ruled” (NRSV). The Targumist’s construction, on the other hand, requires a translation such as I have provided here, “…the leader of leaders.” The effect is that the Targum is not only referring to a period of time (“in the days of”), it is now referring to a specific leader, in fact the best leader, the leader of all leaders, Boaz.

The second point to consider is the Targumist’s choice of נגיד. Throughout Tg. Judg. the noun שפט is consistently translated with נגיד, “leader, chieftain, or prince.” At first glance, this might suggest that this is the single and most appropriate choice in Aramaic. However, when we look at the Targumim outside of Tg. Ruth and Tg. Judg. we find that שפט is consistently translated not with נגיד but with דין, “judge.” Consider, for example, Joshua 23:2. Joshua is getting to the end of his life and he calls together all of the main leaders of Israel, including “their judges,” to hear him speak

In Tg. Onk. these specific roles have been translated in a fairly straightforward manner.

This same rendering can be found dozens of times as שפט is translated with the specific term דין outside of the books of Judges and Ruth. More to the point, however, these are texts where the role described is much more narrow than that of the “judges” in the book of Judges.

Obviously the Targumist of both Tg. Judg. and Tg. Ruth had a clear choice when rendering שפט. So why is it Targumic practice to use נגיד for a שפט who lives during the time of the שפטים rather than  דין?

In modern commentaries on the book of Judges almost always one of the first notes offered is an explanation that the Hebrew term שפט connotes far more than one who sits in judgment over legal cases. Within the book of Judges these central figures are, in fact, rarely depicted as settling such disputes; instead they are more properly described as warlords or tribal leaders. These are figures whom God appointed in some fashion and then led their clan or tribe into battle against the enemy and restored Israelite rule. It is likely that the Targumists were also wrestling with the same question as modern translators: how best to convey in a single Aramaic word the role this figure had. Thus in Tg. Judg. and Tg Ruth the term נגיד is used since their role is not simply to judge legal matters, but to be a complete leader of Israel. In Tg. Ruth, “the leader of leaders” is Boaz who will be equated with Ibzan the Righteous.