The official word is out that Apple will reveal to us their “latest creation” on January 27th. All the world is atwitter with rumors and the latest has the ring of truth. The Wall Street Journal is reporting that the rumor is fact, Apple will release a 10″ tablet device next week that will be focused on media, textbooks, newspapers, magazines, and TV and movies. Apparently the WSJ knows “these people” because “these people say” a lot in the article, but I am betting their surmises are correct. (There is a lot of speculation lately that “these people” whom the Journal has cited before with respect to Apple products are none other than Apple PR themselves. Think of WSJ as the official leak of Cupertino.) But if they are correct I may not be quite as eager to buy this latest lickable Apple offering.

I have mentioned before some of what I am looking for and what I am not interested in with a portable tablet device. This is clearly a portable device, so I want something that will replace, or at least be an “alternative” (as Andy Ihnatko phrased it on MBW), my MacBook Pro. And that has me thinking about how I travel.

I take two types of trips. For example, I will miss the big announcement next week because I will be in NYC for college business. Most of my time will be spent meeting with friends of the college, board members, and so on. When in the hotel I am usually not doing more than replying to emails and the odd blog post. In those circumstances the Tablet would likely be fine. In fact, on planes, it would be perfect. Able to read all my articles in PDF, text, ebooks, etc. Less bulk and awkwardness of a notebook and a backlight making it easier to read in low light situations. As good as a Kindle and more.

But two or three times a year I travel to conferences or libraries to do research. Without a keyboard (discerning pundits think it unlikely that Mr. Jobs will allow an external keyboard, I would say it is even money) and, more importantly, without being able to run “real” OSX apps like Accordance and NisusWriter Pro would make the Tablet next to useless for me. On those trips I need to do real work and, if rumors are correct, the Tablet will simply be running a form of the iPhone OS. OliveTree’s BibleReader 4 is tremendous and would replace much of what I use Accordance for, but not everything. And I need a serious text editor that allows right-to-left language support. Would the iPhone OS based Tablet? Probably not.

Finally, there is an emerging consensus that this device will be like the Kindle, always on network connection allowing immediate download of books, magazines, movies, music, etc. The Kindle uses “Whispernet” which is paid for (apparently, I don’t know for sure) through the cost of the content rather than with a monthly subscription. If Apple takes that route, all well and good. If, on the other hand, one has to have a separate data plan then that will be a deal breaker. (If, on the third hand, it is optional then we are no worse off than with a MacBook equipped with WiFi.)

Will I buy the Tablet? Whom am I kidding, I probably will. Although it would actually be a first for me, I usually do not buy first editions of any product, particularly Apple products. They are known to have 1st rev glitches. So maybe not. 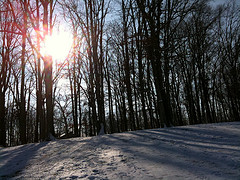 Last week the kids were sledding and I while I did not take my DSLR with me for fear of harming it, […]

UPDATE: It came in! In fact, I called the store, asked if it had arrived. I was put on hold and (later […]