My brother has posted an interesting item over at The Professor’s Notes, “A Cultural or Observant Mac?.” The first thing you should know is that back in the 80’s he went with the Commodore 64 [correction: Amiga, see his comment below] and, by 1987, I went with the Mac (he is 5 years older, so he began making purchasing decisions a bit before me). When he finally had to give up on the Commodore he went with Windows. I have been on an Apple machine ever since with only occasional regrets, never wishing to have a Windows machine except when the bank’s website would only work with IE Windows.

In today’s post the Professor wrestles with what makes a “true” Mac. So this is not about Apple/Mac fans who are often described as cultists, but rather a question of what is indeed the true nature of a Mac.

If you are running Vista is it still a Mac?

The argument seems to be yes, since the hardware is the computer, then the Apple Mac computer is the hardware.

I would accept that a “true Mac” is the combination of the hardware with the software, but the introduction of running Vista (or XP) on the Apple hardware and still calling it a Mac makes murky the water.

Now, with the ability to run the Apple Mac OSX operating system on a number of other Intel based machines, and on a number of netbooks we face a new question:

“If a computer running Vista is still a Mac because the hardware is Apple’s, then is a non-Apple machine, running OSX not a Mac?”

My view is that what has set the Apple experience apart is the tight integration of hardware and software. Yes, it comes with a premium and precludes a lot of customization that some would like to have, but that is small price to pay for the almost bullet-proof experience that it provides from the vast majority of users. Mac users don’t have to worry about dll files or whether drivers will work with the Mac or not (so long as they exist, they work, although I am quick to point out that nothing is perfect and bugs will/do exist in any software and hardware).

My brother concluded with a religious analogy to frame his question:

I am left with another comparison to religion, and thus the title to this post.  Just as we can talk about a “cultural Christian” or a “cultural Jew” (someone connected through the heritage but not through religious or spiritual beliefs) and we talk about the spiritual or observant adherents to those faiths, can we make the same statement about Macs?

Are there “Cultural Macs” (those connected through the heritage that is hardware and logo) and “Observant” or “spiritual” Macs, that have the indwelling of the holy OSX code?

As indicated above, I would suggest that it is a question of both orthodoxy and orthopraxy. The full (“true”) Mac experience is the combination of hardware and software, right belief and right action coming together. Thus a Mac running Vista (booted, not in VMWare) is like a Christian Buddhist, perhaps from the Christian tradition but now a syncretist. Running the Mac OS on a machine built for Windows would be akin to a young convert to Christianity, still struggling to over come the allure of the “flesh,” stumbling on the road to Glory.

Ultimately, however, I believe the focus should always be on the hard/software getting out of the way and allow the user to simply do what they need to get done. The curtain should be torn asunder so that all may enter.

In necessariis unitas,
In dubiis libertas,
In omnibus autem caritas

3 thoughts on “The spirituality of Macs”

Jim W. will no doubt make many observations about this, not least that more than anything else all of the above is […] 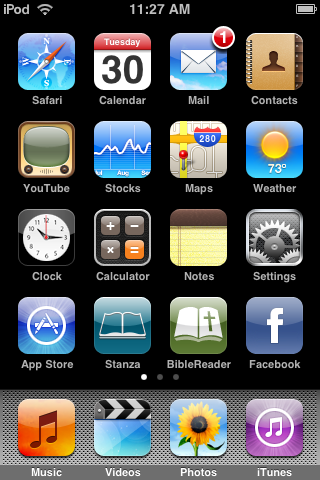 I thought it would be easier to show rather than write what apps I have on the Touch. This was written on […]

This announcement was a long-time coming. I actually spoke with Dr. Collins several months ago to invite him to PSU to speak […]