I stumbled across this blog post (from a blog I have never seen, more on how I got there in another post perhaps) about the new Masterpiece Theatre version of Oliver Twist. It has an impressive cast with Timothy Spall (Peter Pettigrew in the Harry Potter films) playing Fagin. But it is the portrayal of Fagin that blogger Robert J. Avrech upset.

I must have missed a few subtle literary points in college when I was taking a Charles Dickens seminar.

I missed the spot where Fagin, in Oliver Twist, is wearing a gigoondo yarmulke.

Also, blasting right by yours truly—alas, never the best of students—is the part where Fagin abstains from eating pork chops because they’re not kosher.

Who knew that Fagin was an observant Jew?

And I must have skipped the part where Fagin—going all bi-polar—talks to himself in fractured Hebrew and intones: “Never trust the goyim.”

Well I admit it has been a long time since I read Oliver Twist and even longer since I had seen the musical. But Fagin was a Jewish character. According to that bastion of verifiable facts Wikipedia, “Dickens claimed that he had made Fagin Jewish because ‘that class of criminal almost invariably was a Jew’.[5]” (The Wiki article is citing this aricle by Norman Lebrecht from 2005. Lebrecht does not cite his source for the Dickens quote.) Not the most charitable of views on Dickens’ part. So I was surprised at the vitriolic account of the Big Hollywood blog.

What a surprise, I didn’t know I had access to Al Jazeera. It was kind of scary, I mean, I know the Arab world is a sewer of Jew-hatred, but this Fagin is pretty darn close to the image of the evil Jew pushed by the Nazi propaganda machine.

He’s not just the Jew, he’s the devil.

This Fagin is such a leering, salivating monster that I wouldn’t be surprised if, in next week’s exciting installment, he molests a few doe-eyed kids then slaughters them so he can use their blood to bake matzo.

The Blood Libel is alive and well in the Arab Muslim world and making headway, once again, in oh-so-civilized Europe.

Imagine my surprise when the station ID popped up and I discovered that this was not Al Jazeera, but PBS.

Just as I wasn’t surprised that this grotesquely anti-Semitic Oliver Twist is a British production. Most sane people recognize that Britain, in about 25 years, will be ruled by Sharia and cheerily Judenrein.

Woof! Harsh words indeed. It is not his decrying anti-Semitism but rather his attack on PBS and the British that seems o’erweening. Avrech goes on to exonerate Dickens saying that

In truth, early editions of Oliver Twist were tainted by Jew hatred. But Dickens bravely confronted this bigotry and eliminated anti-Semitism from all subsequent editions. He knew it was wrong. He knew it was poison.

I am not sure of Avrech’s source, but it may well be that Wiki article I cited earlier. I also don’t know much about Oliver Twist and Dickens’ anti-Semitism, but a quick Google search shows a LOT of material on the web addressing just this question. One interesting Google result is a 1948(!) Time Magazine article about another Oliver Twist movie and again, arguing that it is “too anti-Semitic.” So what is new is old.

What I am curious about now is the question was Dickens really as forwarding thinking as Avrech, for example, seems to imply? Perhaps Dickens regretted portraying Fagin they way he did but surely he was responsible for the portrayal in the first place. Without excusing his views, should we not simply accept that Dickens was a product of his times rather than try and make him someone other than he was?

Which then brings up the question of interpretation. If Dickens did indeed depict Fagin in this manner, what should a film maker or producer do? Sanitize the work or present it as originally written as faithfully as possible?

Yesterday in my class we dealt with the conquest in Joshua. I pressed the students to realize that God, God mind you!, was ordering Israel to wipe out all the Canaanites. Genocide we call it today. I don’t think reducing or sanitizing the original text is helpful with respect to the Bible, so perhaps Dickens shouldn’t get a pass either? Perhaps Avrech’s indignation is misdirected. Or, as the New York Star columnist Albert Deutsch argued in 1948, does the filmaker have a responsibility to ensure that their work does not “fan the flames of antiSemitism”?

2 thoughts on “Was Dickens anti-anti-Judaism?” 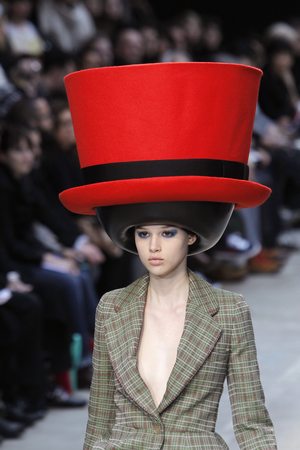 You would think that at some point in the Paris Fashion Show, “Ready to Wear” section, someone would have called BS on […]

Well, maybe not my blog but it seems like it. 🙂 Watch about 2/3 through this piece. The Daily Show With Jon […]

The Economist has a short article on a new edition of the Talmud. I haven’t spent much time with this so I […]