[As I have said in the past, the text of my sermons are not really meant to be read since they are more like a detailed outline than proper prose.]

The Day of the Lord

We are all, I am sure, far more familiar with the last portion of our Old Testament reading from this morning, those words made fresh for the last 40 years by Dr. Martin Luther King, Jr. “let justice roll down like waters, and righteousness like an everflowing stream.” But as powerful as those words are, they do not have their full meaning unless the preceding verses are read with them. And they begin with an odd even paradoxical challenge from the prophet, declaring that the day of the Lord is darkness and not light. Surely that cannot be right! That is not how we think of the “day of the Lord” is it? Actually, that is a good question, how do you think of the “day of the Lord”?

I think most Christians probably think it refers to the “Lord’s day,” meaning Sunday, the day of the week on which Jesus arose from the dead. But that is not what it means in the Old Testament. The day of the Lord was the day when God will come and bring his judgment to this world. This is what Amos was declaring and he was challenging those who felt so self-righteous that they were calling for God to hasten his day of judgment, not realizing that they are just as likely to suffer his punishment as any other. The role of a prophet was not, as people so often think, to predict the future. Rather the prophet was and is someone who reminds God’s people of the promises of God and their responsibility in that relationship. In ancient Israel that meant that the prophets reminded Israel of the covenant that God had made with them and that while God had promised to bless them if they were obedient he also promised to punish them if they refused to obey his law and will for them. Most often, but it would be wrong to think that it was exclusively, the royalty, the aristocracy and the priesthood were the subjects of the prophets’ message.

And the message was routinely reduced to “care for the widow, the orphan, and the stranger in your midst.” These were the groups who were the most vulnerable and if society was caring for them, then that would be a pretty good sign that it was following the rest of God’s laws. The problem that Amos is focusing on in this passage is the hypocrisy that we so often have in our own lives: we don’t have our priorities in order.

Even though God’s law calls for Israel to worship him with songs and sacrifices, if they are not being obedient in other matters, the matters of justice and righteousness, none of it…matters.

I hate, I despise your festivals
and I take no delight in your solemn assemblies.
Even though you offer me your burnt offerings and grain offerings,
I will not accept them;  and the offerings of well-being of your fatted animals
I will not look upon.

It should be obvious that this is one Old Testament passage that does not require a great deal of exegesis to see its application in our own lives, in our corporate lives as a community of faith and in our individual and private spiritual lives. Our tradition places a great emphasis upon…well, tradition. Tradition and ceremony are central to our worship. But if that worship is not transforming us into servants of God and therefore servants of others, it is useless. It doesn’t matter how much we pray or how often we attend services, if we do not allow God to work in us and make us like Christ, taking up daily our cross and giving up ourselves for others, then it is all hallow and meaningless.

In the Law and the Gospels we are called to come together in worship and to offer up sacrifices to God. But God has also declared that he will despise and reject those very offerings if they are not accompanied with a pure and contrite heart. Consider Cain who brought a sacrifice before God, just as Abel had, and yet God only accepted Abel’s sacrifice. Why? Because it was “by faith [that] Abel offered to God a more acceptable sacrifice than Cain’s” (Heb. 11:4). How do we bring our offerings God? Are our prayers, our tithes, our services offered in faithful obedience to God or merely obedience to tradition and habit? Do we return to God what is his while asking him to use us to bring his light and love into this world?

The day of the Lord that Amos declared is still coming and God will hold us accountable for our actions and our inaction. Our Gospel reading this morning is from a larger section in Matthew’s Gospel where Jesus tells his disciples what to expect in those last days, as the day of the Lord draws in. This story of the bridesmaids with the oil lamps, that I think sounds really rather odd and bizarre out of its larger context, is a parable of preparation and priorities.

On the one hand it is simply a reminder that we are always to remain vigilant and expectant for the coming of Christ. As Jesus says in the preceding chapter, we may not know the day or the hour, but we do know that he will come and God will mete out his justice. And don’t forget, Amos was already some 700 years before Jesus’ own time, so we cannot simply push Amos and all of this judgment talk aside as just so much “Old Testament nonsense.” Jesus certainly didn’t think so, but he did understand that we are not a patient people. Today our attention span barely lasts for a 15 minute sermon let alone two thousand years of waiting!

We are waiting for his return, but there is so much work to do. In the parable that follows today’s reading Jesus tells the story of the men who are each given a sum of money. One man is given five talents and he invests it, doubling his money. The man given two talents does the same. The man who is given a single talent buries it knowing that his master can be harsh. The ones who invested the money won their master’s praise but the one who did nothing with what he had been given was thrown out into the “outer darkness.”

We have been given great talents, in wealth and ability, in spirit and capacity for love. We have been charged by Jesus himself to go out into the world and share the Gospel message of freedom from sin and death. There is suffering and hardship in our world. There are so many who do not know the love of Christ and the transforming presence of the Spirit in their lives. Have we shared it with them all? Have we met and dealt with every injustice? His return may seem like it is long in coming but we certainly should not be bored, there is so much work still to do.

When the day of the Lord arrives, when Christ shall come again God will establish his order and set the world aright. In the meantime the command goes out to us “let justice roll down like waters, and righteousness like an everflowing stream.” We are his agents to bring justice and righteousness to this world. Our own sense of justice can so often be flawed and unjust. What we think of as righteousness can often be simply self-serving. And that is why we must be ready, keeping oil in our lamps and our wicks trimmed by continuing to gather in worship, in prayer, and study so that while the bridegroom may be delayed we may grow to understand and live out in this in between time His justice and righteousness.

Take away from me the noise of your songs;
I will not listen to the melody of your harps.  But let justice roll down like waters,
and righteousness like an everflowing stream.

These are not just the words of Dr. Martin Luther King, Jr. This is the Word of the Lord.
Amen.

That is what I always thing of when I hear the word “retreat.” I helped out (last minute addition) with a teen […] 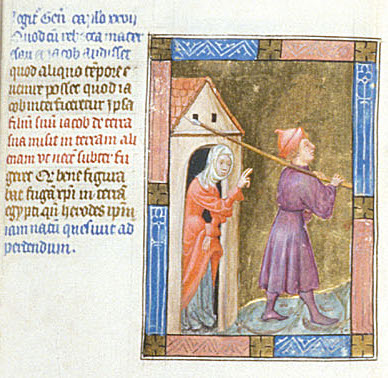 What follows is a subsequent chapter of the work-in-progress I shared last week, Characters of God. (You can read the premise of […]