From a science fiction webcomic that I read, Buck Godot:

In the Prime Mover’s comprehensive overview of sentient and semi-sentient life within the sphere of the Gallimaufry: Why We’re Better Than All Of You Put Together, there are various appendices which deal with predators that feed upon sentients. Journalists are placed within this category.

Despite extremely bad reviews, these concepts were eventually accepted, and the number of journalists a healthy civilization could support was worked out by the mysterious (and, incidentally, scandal-ridden) Mathemagicians of FftFwand, with a very complex and practically incomprehensible formula involving such things as ergs of information multiplied by the number of stress points divided by the intensity of greed waves generated within a specific civilization, et cetera and so on.

Nobody really understood it, but as it called for the euthanasia of vast herds of journalists, nobody really tried too hard.

When the last editorial writers had been shipped off to the re-cycling vats, it was noticed that things seemed a lot quieter, a lot less tense, and things weren’t nearly so bad as people had thought they were. Stress levels went down, and the new system was dubbed a success.

Most planets do quite well with a single journalist.

I bet you laughed. I did.

One thought on “Too many journalists?” 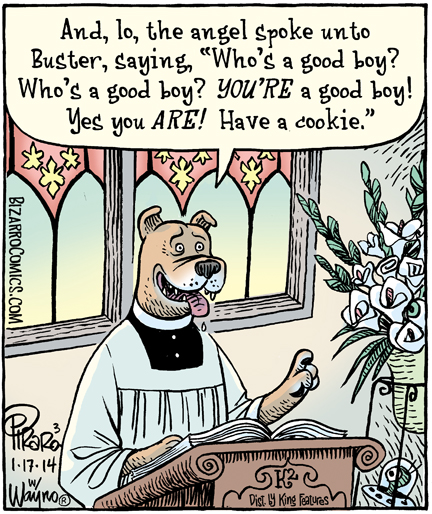 You all know that Dan Piraro is one of my favorite cartoonists. He is not a fan of religion, but he often […]

I was reminded of this comic this morning. Originally posted in June 2007 it still holds true today. 🙂 From Kudzu, by […]

I came across this today on blogger. The blogging name is “Psuedonymous.” Psuedonymously Posting Tuesday, December 19, 2006 Welcome! I wanted to […]

admit it. Haven’t you wanted to do this? httpv://www.youtube.com/watch?v=xf0rrpZv-0U